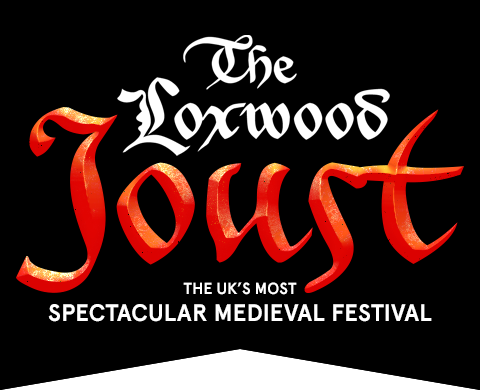 The hazy sun lays shadows lithe and long across a midsummer meadow. People gather to wait and watch, idly feasting on roasted hog and ale. Suddenly, the laughter and chatter is silenced by the thunder of hooves and the furious snorting of horses. The air is pierced by the screech of battle cry and the clashing of sword upon sword…

This, good sirs, is the Loxwood Joust
The Loxwood Joust is the most spectacular medieval festival in the UK. This weekend extravaganza features full-contact jousting twice each day, along with other daring displays of weaponry, archery and cannon fire as armoured knights prepare to meet in thunderous battle.

See history come alive and discover a world long lost to the mists of time.
Wander the Living History Village, situated in the Medieval Meadow, where inhabitants live and work exactly as they would have in the middle ages. Peruse their traditional wares in the Medieval Marketplace, where traders and hawkers vie for your attention and wandering minstrels, dance troupes, and a court jester entertain the crowds throughout the day.

The younger ones among us have their very own land, the CHILDREN’S KINGDOM – a festival within a festival. Here, the currency is the medieval groat, which kids can use to try Have-a-Go Archery, Face and Wound Painting, Pelt The Peasant, Sword school and The Bouncy Castle.

Meet larger-than-life characters from the middle ages in the MEDIAEVAL LEARNING ZONES, which offers vivid storytelling from the Medieval Housewife with tales of the life of a medieval wife, the Executioner, who will explain the gruesome details of medieval torture – a subject not for the faint-hearted, and the Copper Pot where our medieval chef will guide you through the weird and wonderful kitchen of medieval cooking.

And, if after all the excitement you need to rest, why not allow the Mediaeval Baebes, maidens fair, to soothe your weary souls and transport you to a fairytale world with their romantic songs of chivalry, love and loss.

The Loxwood Joust is a pageant of passion, a festival of filthe and fury.

This website uses cookies to improve your experience while you navigate through the website. Out of these cookies, the cookies that are categorized as necessary are stored on your browser as they are essential for the working of basic functionalities of the website. We also use third-party cookies that help us analyze and understand how you use this website. These cookies will be stored in your browser only with your consent. You also have the option to opt-out of these cookies. But opting out of some of these cookies may have an effect on your browsing experience.
Necessary Always Enabled
Necessary cookies are absolutely essential for the website to function properly. This category only includes cookies that ensures basic functionalities and security features of the website. These cookies do not store any personal information.
Functional
Functional cookies help to perform certain functionalities like sharing the content of the website on social media platforms, collect feedbacks, and other third-party features.
Performance
Performance cookies are used to understand and analyze the key performance indexes of the website which helps in delivering a better user experience for the visitors.
Analytics
Analytical cookies are used to understand how visitors interact with the website. These cookies help provide information on metrics the number of visitors, bounce rate, traffic source, etc.
Advertisement
Advertisement cookies are used to provide visitors with relevant ads and marketing campaigns. These cookies track visitors across websites and collect information to provide customized ads.
Others
Other uncategorized cookies are those that are being analyzed and have not been classified into a category as yet.
SAVE & ACCEPT
Powered by